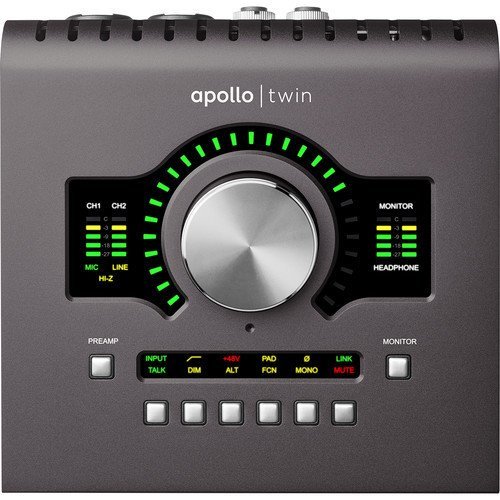 Apollo Twin MkII is a ground-up redesign of the world’s most popular professional desktop recording interface for Mac and Windows — delivering enhanced audio conversion with the tone, feel, and flow of analog recording.

Built upon UA’s 60-year heritage of audio craftsmanship, Apollo Twin MkII starts with two Unison™-enabled mic preamps and stellar next-generation A/D and D/A conversion derived from UA’s flagship Apollo 8, 8p, and 16. Together with its included bundle of UAD analog emulation plug-ins — which you can track through in real time with UAD-2 SOLO, DUO or QUAD Core processing — Apollo Twin MkII is born to make records.

The secret to Unison is its hardware-software integration between Apollo’s mic preamps and its onboard UAD-2 SOLO, DUO, or QUAD Core DSP Acceleration. Simply place a Unison preamp plug-in on your mic input, and tap into the classic sounds of the world’s most recorded mic preamps.

A Full Suite of Classic
Analog Processing Onboard

Right out of the box, Apollo Twin MkII provides a suite of incredible analog emulation plug-ins including the world’s only authentic Teletronix LA-2A, 1176LN, Pultec EQs, and the Unison-enabled UA 610-B Tube Preamp. Developed by UA’s world-renowned team of algorithm engineers, these Realtime Analog Classics plug-ins set the standard by which all other hardware emulation plug-ins are judged.

From the tube warmth of the Pultec EQ on guitars, to the gentle limiting of the LA-2A on vocals, your recordings will take a giant leap forward in rich, sonically complex analog sound.